Who performed the simulation analysis?

What phase of the project was analysis conducted?

The high cooling dominated climate conditions and the parallel urban development in the cities of United Arab Emirates has pushed the government and the environmental bodies to investigate ways to reduce the cooling demands and energy consumptions. In the United Arab Emirates (UAE) buildings consume about 70-80% of the total country’s energy generation. High building energy consumption in UAE is because its climate falls under ASHRAE zone 1A which indicates buildings are of cooling dominated without heating except for domestic water heating applications. There are various studies on the urban energy simulations to study urban demands and performances, but it is limited and not covering the recent developments in the UAE sustainability standards and regulations which came later in the year 2009. So, there is a need to analyse various parameters stipulated in the local regulations and compare it with the recent development in the international standards to identify its influences on the district level energy performances of built environments. The parameters for investigation can be building regulations parameters (like building envelope U-values, indoor set points) or design variables (like supply temperatures, HVAC systems, window-wall ratios). So, This Case Study focused on identifying the influential design parameters derived from the local regulations and the international standards for lowering the cooling demands of urban scales.

As the Casestudy requires to study the effects of various parameters it requires varying them parametrically to study the output from the building simulation programs, so it is prefered to use text input and text output type BPS programs. With text-based BPS programs, the pre-processing and post-processing can be done more efficiently by custom-made scripts as per user requirements. Building models and HVAC system models are modelled in DesignBuilder software and the Input Data File (IDF) exported from them are used for parametric simulations. For the Parametric simulations, the job lists or multiple IDF files are created using SIMLAB and jEplus tools. The output files from the multiple simulations are extracted using custom based scripts. The Outputs from each input’s combination are used to rank the input parameters using Sensitivity Analysis. The Complete workflow is illustrated in the Methodology flow chart. Big data from the simulations can also be used for direct searches, optimisation tools, Metamodel developments to simplify urban simulations model simulations.

Extended FAST variance method is chosen to study the effect of the input parameters to the output (cooling load, electrical demands and thermal comforts) variances. Based on the sensitivity analysis, all the parameters are ranked for cooling demands, electricity demands and thermal discomforts. The Ranking of parameters enables the design team to address key parameters in the design for low energy consumptions. In this casestudy, the outputs of the sensitivity analysis are visualised using tornado plots and outputs of total simulations are plotted for direct searches , meta model developments (MLR). In the variance-based method, two main sensitivity measures are quantified namely first order and total order effects. The first order quantifies the main direct effects of the output variations due to the corresponding input parameter. Total order effects include quantifications of variations in the output due to the total contributions of first order and higher order effects by their interactions. So the difference between first and total order gives the measure of the interactions between input parameters. 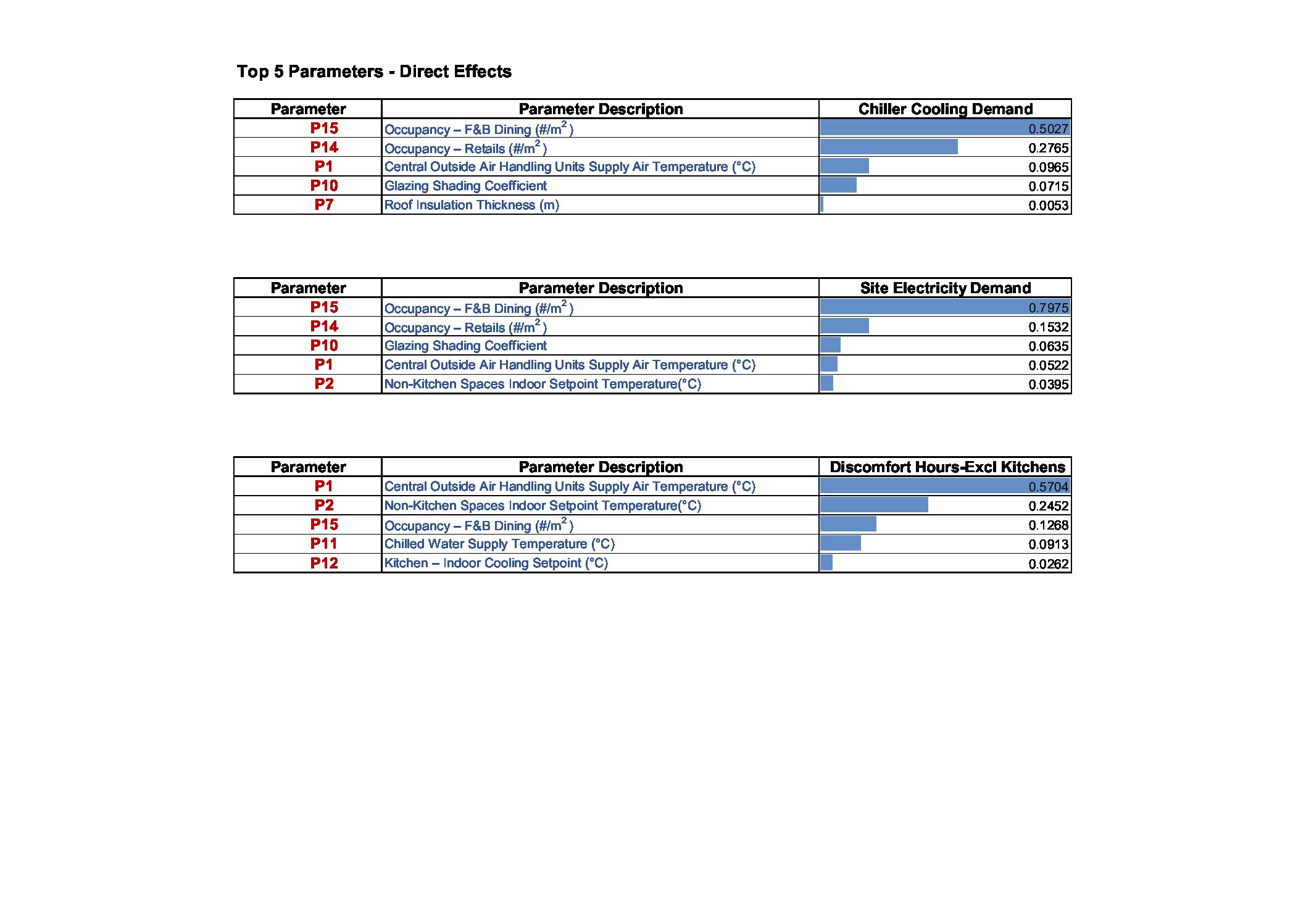 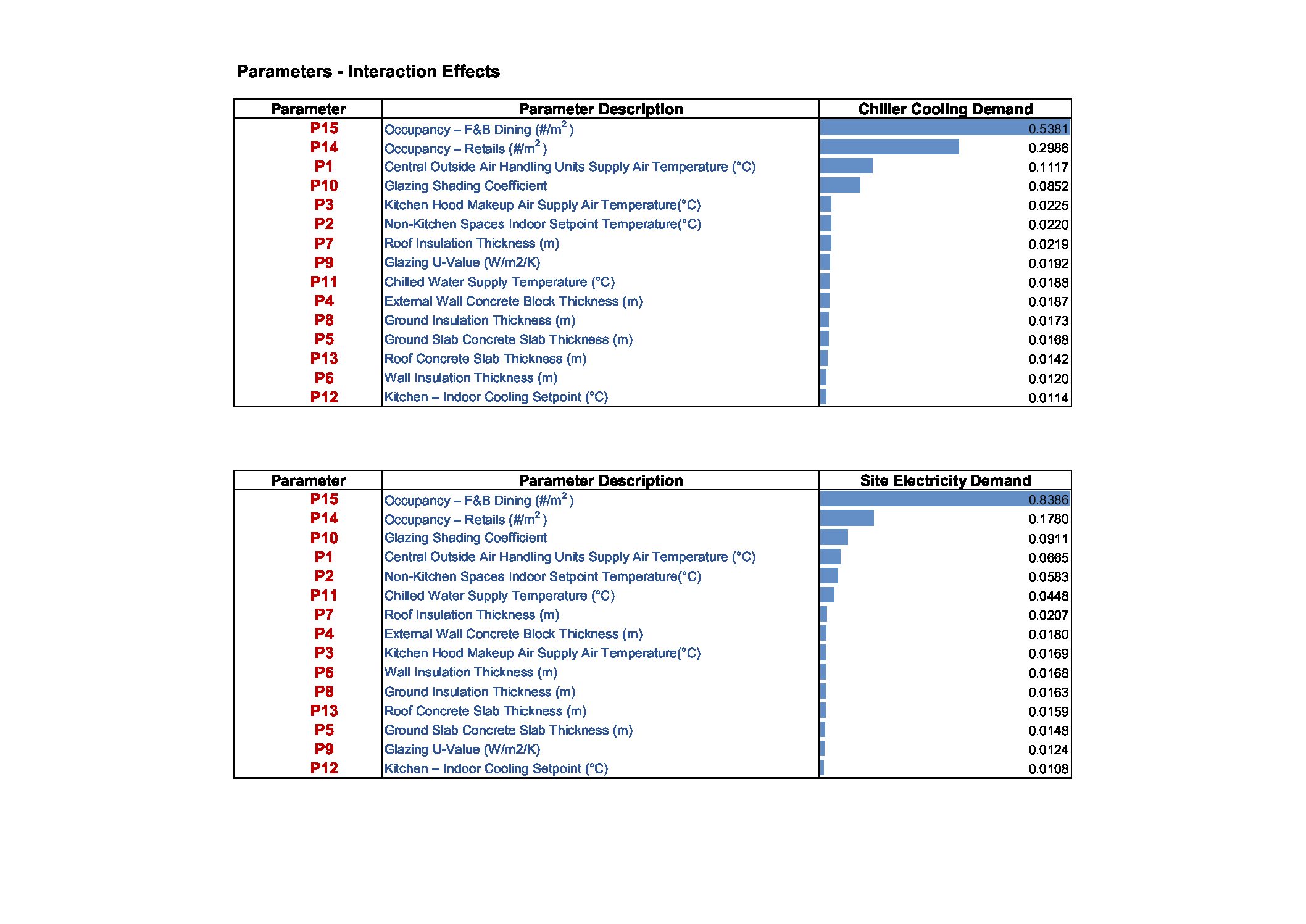 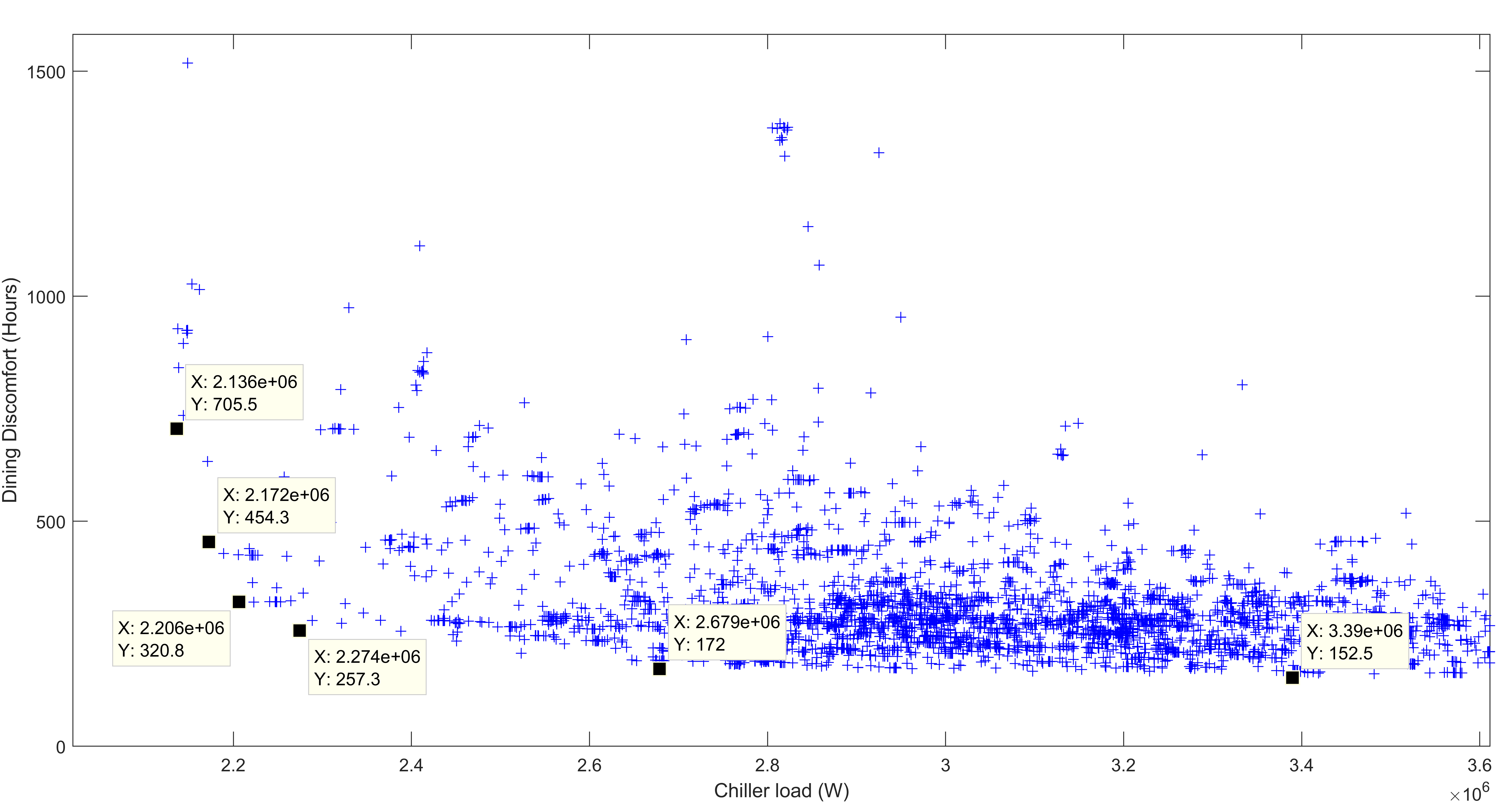